As we prepare to welcome our Ram Lalla. Let us take a moment to express gratitude towards all the Dharm Yodha whose invaluable sacrifices led us to this historic occasion.

In 1717, Shri Rajput noble Jai Singh II purchased the land of the mosque & vested it in the deity. This gave Hindus the right to worship Prabhu Shri Ram's idols outside the mosque. This led to raising of a platform near the Babri Masjid (illegal structure) in 1857 which upon complaint by Muslim parties to then Collector, finally led to the construction of a wall mainly to separate two structures, thus indirectly paving ground for 1st legal claim of Hindus over Janmabhumi. Mahant Shri Raghubardas in 1883 began building temple upon the raised platform. Upon being stopped by the collector he was the first Hindu claimant to file a suit for right of Hindu ownership and temple construction at Shri Ram Janmabhoomi.

This led to devotees (Ram bhakts) being given officially the right to divya darshan (viewing) from a side gate of the deities thus proving another crucial step in the struggle of Ram bhakts for their right of worship to be legally recognized by State. During the days of temple movement, Baba remained the most crucial voice of Hindu saints and followers. As head of Ram Janmbhoomi Nyas, he spearheaded the fight with great devotion for 50 years from 1934 agitation to 1949 filling of first case in court of independent India. Freedom fighter, philanthropist Shri Hanuman Prasad Poddar ji, arranged financial provisions for the sadhus of Ayodhya for an akhand kirtan and fighting the legal battle as well. As editor of magazine Kalyan, he used the power of pen to raise awareness on the crucial nature of the Ram Janmabhoomi movement. Mahant Shri Digvijaynath ji, who was the Dada Guru in the line of Gorakhnath Math Mahants of present UP CM Shri Yogi Adityanath ji. He organised a nine day Ramcharitmanas Recitation anusthan outside Babri Masjid(illegal structure) in Ayodhya which gave impetus to temple movement.

He also played a pivotal role in helping Shri Ram Lalla Virajaman appear inside the temple(Garbh grih) premises. Upon insistence by PM Nehru to remove the deities, he courageously proclaimed: "We will not let you do that as long as we are alive". In 1949, Mahanta Shri Avaidhyanath ji, the disciple of Mahant Shri Digvijayanath ji founded the Shri Ram Janmbhoomi Mukti Yagna Samiti in 1984 & led a march from Sitarmahi (Bihar) to Ayodhya to “liberate” the Janmsthan.

Shri K.K. Nair ji - As DM of Ayodhya, in 1949, he refused various direct orders from PM Nehru himself to vacate the Shri Ram Lalla and mata Sita vigraha from the temple premises even at the cost of his whole bureaucratic career. 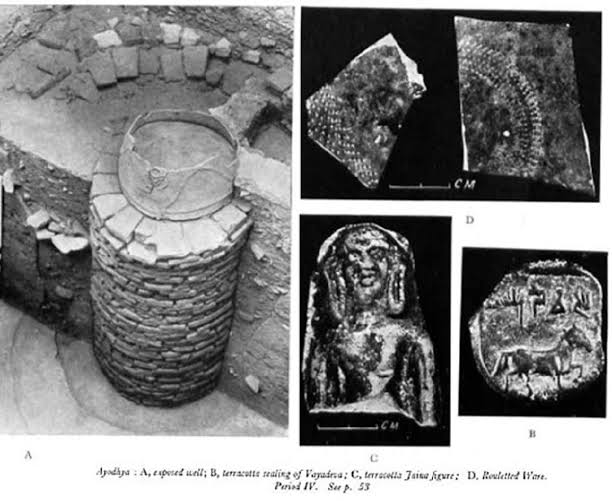 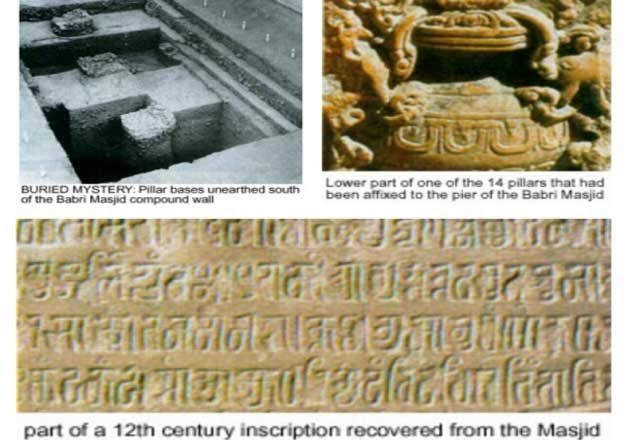 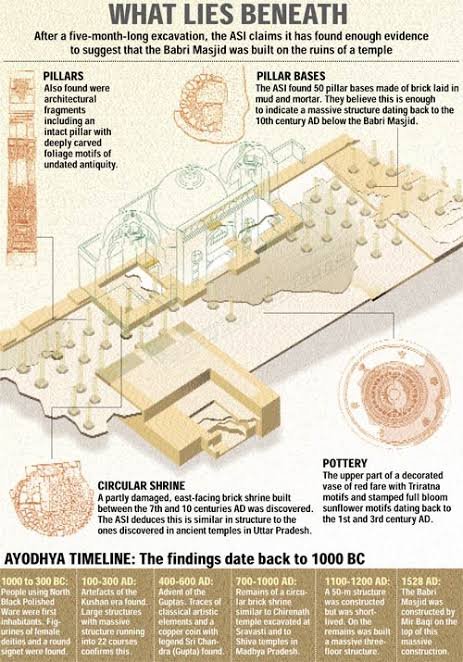 In the eyes of the respected law, sitting deity(dev vigraha) is a perpetual minor, so he needed to be represented by a next of friend. So he filed writ petition to appear in the suit as Shri Ram Lalla's sakha (friend). After he passed away in 2002, Shri TP Verma ji, a retired history professor at Banaras Hindu University (BHU), Varanasi, was appointed the next 'sakha'. In the present suit, Shri Trilok Nath Pandey ji, represented the deity as next of friend. Shri B.B. Lal ji who led the ASI study which found total 12 pillar bases of Shri Ram Temple in 1975-76 which carried Hindu motifs, mouldings, figures, carvings of Hindu deities.

Hounded and opposed by leftists, chased by murderous mobs of specific religion during excavation, he continued undeterred in his quest to bring light to the objective truth. His project was titled "Archaeology of Ramayana Sites" excavated total five Ramayana related sites of Ayodhya, Bharadwaj Ashram, Chitrakoot, Nandigram & Shringaverapura. He published a book titled Rāma, His Historicity, Mandir and Setu: Evidence of Literature, Archaeology & Other Sciences. He submitted his clear preliminary findings to ASI upon which all his technical and supportive facilities required to continue further excavations were withdrawn, and despite repeated requests, the project wasn't revived for next 10–12 years. Justice Shri Krishna Mohan Pandey ji, on Feb 1, 1986, as District Judge, ordered the gates of the "disputed site" to be opened by authority for darshan & pooja of Shri Ram Lalla. This judgement cost him promotion & elevation to High Courts.

From 1984 onwards Singhal ji became the key co-ordinator between Hindu sadhus & BJP politicians and rendered his pious service in the stormy days of kar seva & shilanayas (laying of foundation stone) of the Shri Ram Janmabhoomi temple. Later as mascot of temple movement, he felt compelled to sit on fast unto death to protest against what he felt was callous approach of ignorant Government. From then till 2015 when he attained holy lotus feet of Shri ram, he continued his Satyagraha for this great and devoted cause of collective Hindu consciousness.

Shri L.K Advani ji who led the ram rath yatra from Somnath in Gujrat to Ayodhya in UP had an significant role in re-awakening Hindu voices all over India for the sacred and pious cause of Shri Ram Mandir Ayodhya. Though the procession never reached to Ayodhya as Advani ji was arrested in Bihar on the orders of the then CM Lalu Yadav, it's real purpose was fulfilled & the slogan of "Shri Ram Lalla hum aayenge, Mandir wahin banaayenge" became a reverberating slogan all across Indian heartland among Hindus.

The invaluable contributions of many Hon'ble leaders like Shri Atal Bihari Vajpayee ji, Shri Murli Manohar Joshi ji & firebrand politicians like Shri Vinay Katiyar ji, Shri Uma Bharti ji, Shri Sadhvi Ritambhara ji etc gave additional impetus to VHP-Sangh Parivar's campaign of converging all Hindu and Sanatan dharmi voices for temple construction at Janmbhoomi in Ayodhya. Shri Kameshwar Chaupal ji, a kar sevak from Bihar on 9 November 1989, laid the first and foremost brick(Shila) for construction of Shri Ram temple at pious Janmabhumi. The brave Kothari brothers, Ram & Sharad were the first karsevaks to proudly mount the saffron flag(Dhwaja) atop the then disputed(illegal) structure. 72 hours later police brutally dragged them out of the house & shot them on head along with many other sadhus and kar sevaks such as Shri Ramesh Pandey ji, Shri Babulal Tiwari ji and many others.

These multiple incidents of police brutality were intentionally suppressed in Indian media, promoting the extreme tolerant Hindu community to launch a nationwide awareness program mainly displaying valuable Asthi Kalash of these veer balidanis. Around Hanumangarhi, an alley was intentionally renamed Shaheed Gali to commemorate their valour and bravery. Shri kalyan Singh ji who as then CM of Uttar Pradesh provided security to the temple premises & later taking complete moral responsibility for the demolition of disputed(illegal) structure sacrificed his political career forever by saying "This govt. was for Shri Ram Mandir and now it's mission is getting fulfilled".

Team of total 8 archeologists along with former ASI directors, Dr. Y.D. Sharma ji and Dr. K.M. Srivastava ji in July 1992 went to the place Ramkott hill excavated religious sculptures, a statue of Shri Hari Vishnu. They concluded that the fragments belonged to a temple of the Nagara style (900-1200 AD). Among this team was Dr. Swaraj Prakash Gupta ji who found a number of amakalas(art of shikhara) i.e. the cogged-wheel type architectural element which crown the of spire or shikhara, a characteristic feature of every north Indian temple of the early medieval period. Dr. Gupta also found coins, cornices, pillar capitals, carvings, mouldings, door jambs with floral patterns leading him to finally conclude, "This leaves little doubt regarding the existence of a 10th-12th century temple complex at the site of Ayodhya ji”. He faced huge backlash for his findings & for exposing leftist lies by giving evidence of numerous vandalism & iconoclasm at the sacred site of janmbhoomi before Allahabad HC. I wish he was still with us to witness his vindication and fulfillment of this great civilizational triumph.

(This model is proposed for construction of vigraha of maryada purushottam).

Former ASI regional director, Shri K.K Mohammad ji who in his testimony and statement to Supreme Court of India conclusively said that Babri Masjid was built on the remains of Shri Ram temple in Ayodhya. He was part of the student delegation team during Shri B.B. Lal's first Ayodhya janmbhoomi excavation in 1975-76.

After his retirement through his talks and specific books, he always tried spreading awareness about the conclusiveness of ASI findings in Muslim intellectual community in an effort to rally them for a peaceful settlement of this long pending cause. Just like his predecessors he too was hounded and threatened by communist historians who tried casting aspersions on the career capabilities of this great padmashri awardee eminent archeologist of India. With the Supreme Court verdict he too now finds vindication and our collective heartful gratitude. Renowned historian & famous political scientist Dr Meenakshi Jain ji who gave vast array of historical evidences in her books “Rama and Ayodhya” and “The Battle for Rama" to establish the strong centrality of Shri Ram in Ayodhya and demolish the false claims and propoganda of leftist historians. Shri Shri Ravi Shankar ji, spiritual guru & founder of Art of Living Foundation, as part of SC appointed mediation panel tried for an amiable settlement of the dispute between both religious communities on mutual understanding.

Former Attorney General & Pitamah of Indian Bar, Shri K. Parasaran ji. His erudite legal and Hindu scripture scholarship and great oratory skill were keys to success of Ram Lalla's case as a juristic person and titular owner of Shri Ram Janmabhoomi. Respect to this 93 year old legal luminary. He is known as God’s Advocate. Our Hon'ble Prime Minister Shri Narendra Modi ji who from being the architect of Shri Advani ji's Rath Yatra to heading so fearlessly the world's largest democracy, has played crucial, unparalleled role in ensuring a successful conclusion of Shri Ram Janmabhoomi movement.

Lastly but most importantly the respected 5 judge SC Bench led by CJI Shri Ranjan Gogoi ji which pronounced this historic verdict. Their tremendous judicial wisdom finally led to a joyous culmination of this centuries old civilizational struggle between religions with a balanced & optimal solution for all parties concerned.

May our Maryada Purshottam Shri Ram continue to bestow his divine blessings on all of us. Always feel proud to be the caretaker of such glorious past which was preserved by our ancestors for so long.

Thanks for your attention.

THE TRANSGENDER PROTECTION OF RIGHTS ACT, 2019